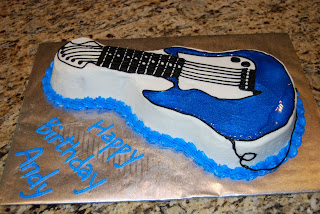 A friend of mine who attended Nathon's birthday party last weekend asked me to do a guitar cake for her brother's birthday the next weekend. So, I did another electric guitar, but made it sparkly blue this time.

I guess if you're passionate about being a musician, it doesn't matter what age you are - you're not too cool for a guitar cake!
Posted by Kelley at 7:14 PM 1 comment: 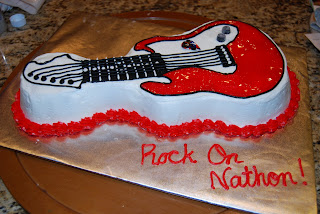 I got lots of inspiration from Cake Central for this electric guitar cake for my son. I ended up just buying the guitar-shaped pan at Michael's. He was pretty excited about it. He picked out the red sparkle gel himself. Wilton makes it now - in red, yellow, blue, etc. It sure was easier than doing all those stars on SpongeBob!
Posted by Kelley at 2:31 PM 3 comments: 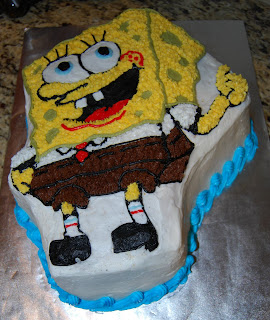 My neighbor's daughter is having a birthday party this afternoon, so I made her a SpongeBob SquarePants cake. Allie told me months ago what cake she wanted, so I hope she likes it!

There is a LOT of detail work involved in these character cakes! Outlining and tracing and stars, oh my! Anyway, I do believe my favorite part of this cake is the bottom border. I came up with the idea of making waves at the last minute, and I think it turned out really cute. Don't you? 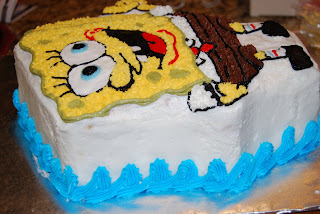 Posted by Kelley at 9:44 AM No comments:

Update your bookmarks! I just got the domain name for this site changed over to:

www.creativecakeworks.com
Like it? Sorry about all of the name changes lately... this is where I'm staying for at least a year. Promise.
Posted by Kelley at 11:18 PM No comments:

Once upon a time, I had a friend named Allison. She would e-mail me months in advance of her own birthday, just to make sure I kept the date clear for making her birthday cake. She was very specific about her birthday cake demands. Her husband would always nervously call me with these crazy ideas of hers. This particular year, on her 30th birthday, she requested a cake with as much candy, sprinkles, and marshmallows as I could get on one cake. So, I made this 2-layer chocolate cake, filled the middle layer with buttercream icing, mini-marshmallows, and pink sugar sprinkles. Then I decorated the top with more icing, spelling out "Happy Birthday." I spelled out her name and age in candy letters, lined the bottom border with more marshmallows and peanut M&Ms, and topped it with more sprinkles of different shapes and colors -- pink and purple sugar, pastel flowers and pink & white hearts. She absolutely loved it! 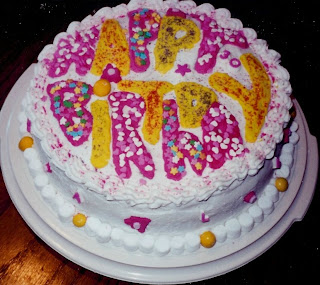 And the next year, her cake was chocolate with chocolate frosting, and a giant chocolate-chip cookie between the layers. Yum!
Posted by Kelley at 1:18 PM 1 comment:

Sometimes, people make requests for character cakes that I don't have the specific shaped pan for, or sometimes people want a design to match a very specific theme or napkin, or whatever. I'm so thankful to have learned a technique in my cake decorating class called the "transfer." You can basically take any image and literally transfer it onto an iced regular round or sheet cake. Here are a few examples of transfer cake designs I've done in the past: 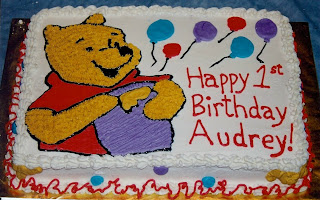 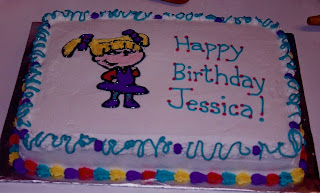 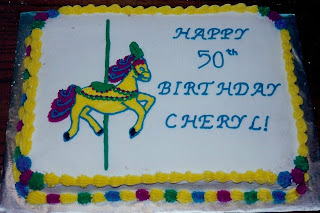 Interestingly, I find that coloring book pages work quite well for this technique because of their generally simple designs and bold lines. I've also downloaded images from the internet, or used the customer's party decorations as a template. You just have to be able to trace the design onto a sheet of wax paper (or regular paper). I usually use pencil and then go over it with clear piping gel. Then, I flip the paper over onto the cake and gently rub it to be certain that the piping gel sticks to the buttercream icing (or fondant, as the case may be). Next, I carefully remove the paper. Now, I'm able to re-trace the outline of the image with colored piping gel or icing and begin filling in the design with stars, just like I would have done if had used the shaped character pan. 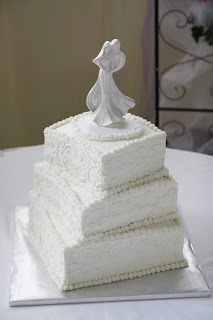 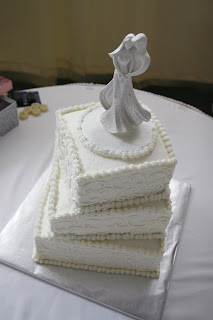 I think I mentioned in my previous post about this wedding cake that the caterer had put artificial flowers all over it by the time I came back to take pictures with my camera. (Her reaction when I returned to the reception hall was a surprised, "Oh... you're back!")

The way I see it, it was their cake and they're entitled to do whatever they want with it. The bride just never told me that they planned to put flowers on it. It looked fine, though. I was bummed, not because they did it, but because I didn't get to take my pictures before they did it.
But then I remembered that the wedding photographer, Jesse Garrett, was standing right there ready to snap some photos the very minute that I finished piping icing on that cake. I had planned to contact the bride when she returned from her honeymoon next week and ask for his contact information, but I happened to run into him myself on Monday night. And he was gracious enough to e-mail me the pictures he took.

So look! I have professional portraits of my first wedding cake (in its pre-floral state)! Lucky me!
Posted by Kelley at 8:08 PM 1 comment: 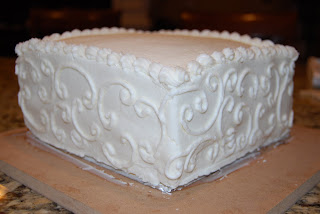 It's finished! After a full week of baking, mixing, piping, and STRESSING OUT! my first wedding cake is finally finished. I've made 3 cakes in a week before, but this was like doing 3 cakes in a day! And THEN we had to transport it, assemble it (NOT an easy task!), and finish the borders and topper. WHEW!

I forgot my camera when we delivered the cake to the church, but I went back about 1/2 hour before the wedding to take some pictures, and they had put lace and greenery around the base, and pink silk flowers cascading down the cake. So, I can't take credit for those. Anyway, here are a few photos: 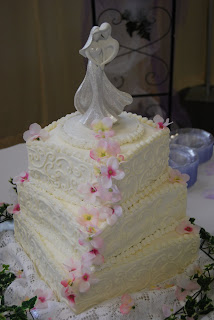 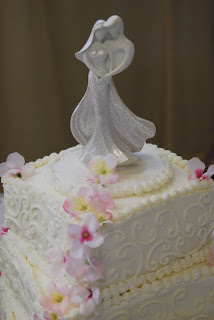 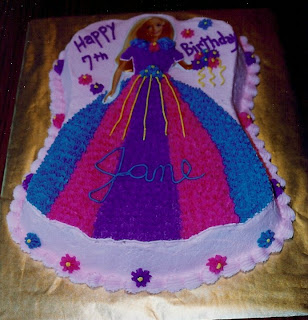 ... I made this cake for a fellow youth leader's daughter. I still have this pan, though, and I love the plastic Barbie face and bodice that you have to decorate into the cake. I love it because I don't have to worry about making the face look just like Barbie, and wonder if the little girl will recognize who it's supposed to be. 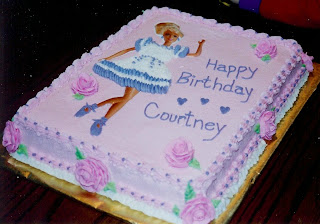 ... for another fellow youth leader's daughter. How funny! This was early on in my cake decorating career, before I got really lazy. So yes, I did make all of those roses myself!
Posted by Kelley at 10:17 PM No comments: 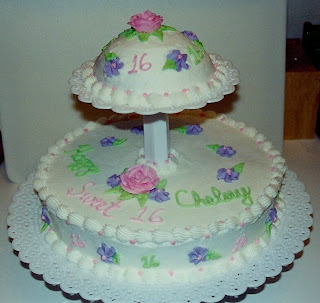 ... for my cousin's Sweet 16. The top tier was half of the 3-D ball cake pan. I was only slightly lazy at this point - still made the rose myself, but only made one! 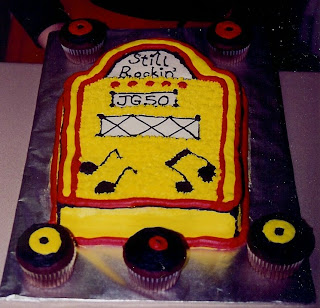 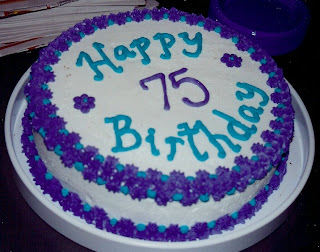 ... for my grandmother's 75th celebration. I just loved the color combination on this one.
Posted by Kelley at 7:56 PM No comments: 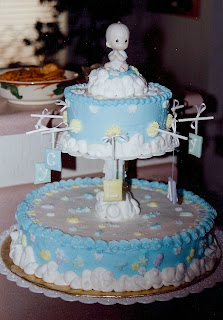 ... for my sister's first baby shower in 1998. It's supposed to look like a mobile, with the letters of her baby's name "C-L-A-Y" dangling from the top tier. Adorable. The top tier was a "dummy" made of styrofoam, because I didn't need that much cake, and I was afraid actual cake wouldn't hold up those sticks. 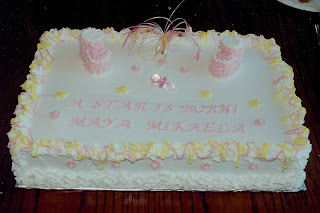 ... for my aunt's co-worker (years ago). I love making the keepsake booties from marshmallows and royal icing. My Aunt Cyndi used to make them for many of her baby shower cakes too. They dry and harden, and they can be kept forever. 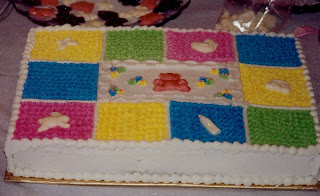 ...for my other sister's first baby shower in 2000. It was supposed to look like a quilt, but the colors came out much brighter than I had anticipated. I made the little figures on top from candy melts because I hadn't discovered fondant yet.
Posted by Kelley at 10:13 PM No comments: