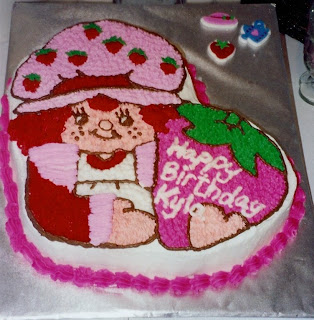 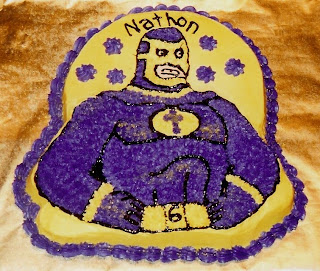 ... the Batman pan re-purposed as "Bibleman" for my son's 6th birthday. 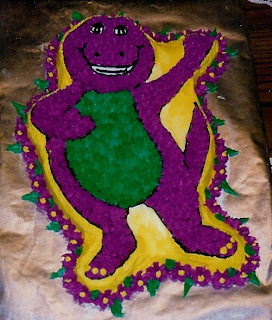 Last night I ran into the couple who hired me to do their wedding cake in August. I had made them a 3-tier square cake with white scrolling on the sides. It turned out really well, but their cake topper was too large to fit on top of a small anniversary cake layer, so I asked the bride if she wanted me to just make it separately for her to freeze, or if she'd rather have me make a fresh one next summer. She thought about it and decided to just have me make the anniversary cake next August, when they will be celebrating their first anniversary. Then it would be freshly made, not frozen, and it wouldn't take up room in their freezer all year.


Anyway, last night at this costume party, they kindly made a point to tell me how great the cake was, and how much they loved it. I thanked them, and then the bride told me how much her groom was (already!) looking forward to the anniversary cake. She said, "He can't stop thinking about it. He's already been asking me, 'Doesn't she owe us that anniversary cake?'"


Umm... it hasn't even been two months yet! It's a good thing I didn't give them one to freeze, or it would probably be gone already!
Posted by Kelley at 11:19 AM 1 comment: