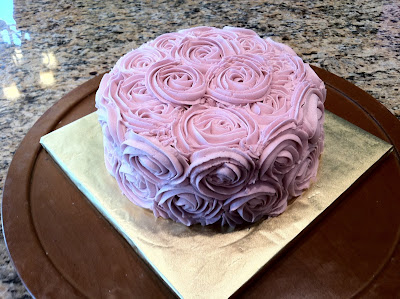 So, at Sam's birthday party (see the giant donut cake in the previous post), many people "Ooohed and Aaahed" about the cake.  So fun! So creative! So amazing! So yummy! So SAM!  My friend Sara approached me and asked if I could make a cake for her mother's 84th birthday the following weekend. She's one of those easygoing people who gave me complete artistic freedom.  No theme, no set color scheme. We talked and decided on the flavors - chocolate cake with buttercream icing. She was afraid her mother had never had fondant and wouldn't like it much.
So.  If you don't know me very well, you might not be aware that decision making is NOT my strong suit.  But, if I see the right idea, I will immediately know it's perfect.  It's like when we were shopping for seating for our home theater room. I searched high and low for just the right sectional - size, shape, color, fabric, cost. But something was always "off." Until December 23rd, when I was walking through Costco. I saw it like a light from heaven was shining down.  The perfect chocolate brown wedge sectional at just the right price. I called my husband over for a look, and the decision was made then and there, in less than 10 seconds. No regrets whatsoever. So happy, but I digress....
I searched all my usual places for Grannymom's cake ideas.  I looked on Cake Central, I flipped through several Wilton yearbooks.  Even thought of doing a cupcake pull-apart in the shape of the number "84." (Cheesy, I know, but I was running out of time!)  Then, out of the blue, a friend in Arizona sent me a link to a blog called "i am baker."  The post that she linked had the most stunning cake of solid roses.  Y'all... it was LOVE at first sight!  I knew this was the cake that I had to make for Grannymom.
And I hear that she loved it, which is all that matters to me.
By the way... I think this cake design would be just LOVELY for a Mother's Day brunch, a Bridal Shower, or even a Wedding! Couldn't you just imagine tiers of this design all in white, or even different shades or colors? It would be stunning! Know anyone who's getting married soon?
Posted by Kelley at 12:23 AM 3 comments: 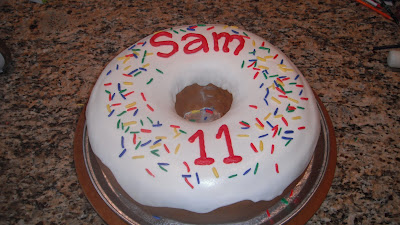 My wonderful friend Holly sent me an invitation to her son's birthday party, and I immediately replied and said I hoped she'd let me make his cake. Sam is such a great kid, and I knew this would be a fun project.  His initial ideas for his cake involved something called Beyblades. He tried to explain them to me.  They're toys (like spinning tops) that battle each other in plastic arenas that resemble a kitty litter box (or so I'm told). Waaaayyy beyond my limited comprehension!
So, one day, Holly calls me up and announces that she has the PERFECT idea for Sam's cake. A giant donut!! Sam LOVES donuts... you don't even know how much.  Anyway, I was very excited about the idea... my creative juices immediately started flowing.  We decided to keep it a BIG surprise. And I'm so glad we did, because the expression on his face was just priceless!  He said, "It's a GIGANTIC CAKE OF AWESOMENESS!!!" 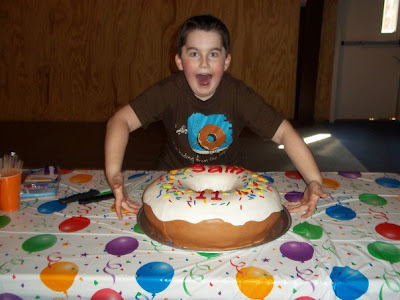 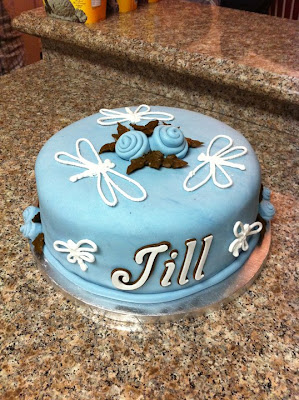 Our good friend Jimmy called me up and requested that I make a cake for his wife's birthday.  The only two ideas he gave me were that she's a huge Georgia Tech fan, and she LOVES dragonflies.

I searched Cake Central's website and saw a cake with these beautiful dragonflies with shimmery wings made of GELATIN, of all things!  Long story short, I tried to make the gelatin wings, but they didn't really come together very well. Maybe some other time.

So, I kept looking for other ideas. Found another design on CC that featured dragonflies made of royal icing. Easy enough, right?

OK, so maybe I'm being "slightly dramatic," but I kid you NOT, I was down to 3 or 4 dragonflies from the night before.  I made some more, bringing my total number of dragonflies to around 50, and hoping against all hope that they would be dry enough before the party that they wouldn't break.  Well, I ended up with a whopping 7 dragonflies attached to the finished cake.  One of which I broke when I picked up the cake on my way out the door! Luckily I was able to fix it on the spot, and we had a wonderful celebration.

I would also like to mention that this was my first successful attempt at using my Cricut Cake machine for the lettering on this cake.  I learned a few things from trial and error, and got really lucky this time. I think it looks pretty nice, don't you?
Posted by Kelley at 11:58 PM No comments: