It Took a Village...

Been planning this cake project for quite a while now. As soon as some friends of ours got engaged and set their wedding date, the bride immediately approached me to ask about making their cake. She had such a beautiful vision for the theme of the wedding, the colors, the setting, EVERY DETAIL.  One of the things that she envisioned was a cupcake tower, with a cake stand made out of tree rounds. I found some cupcake inspiration on Pinterest, and we went from there. Their flowers were orange gerber daisies, so that's the element that we chose to highlight on the cupcakes. And, at the last minute, she ordered the perfect cake topper - a wooden canoe with little oars and a heart bearing their initials. 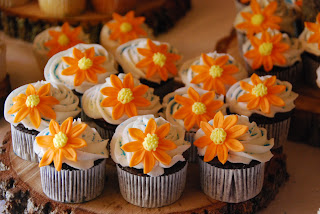 The stories that these lovely photos DON'T tell are about several people who helped me, and about the near-disastrous delivery.  First, I had THREE generous neighbors who came over and helped me make parts of this project.  Earlier this summer, I talked to my friend Michelle about cake decorating, and she offered to come over and help me if I ever needed an extra set of hands.  I felt like having to make 150-200 daisies qualified as a big enough project to ask for help on, so I texted her.  She came over on Tuesday for a couple of hours and helped me make about half of these orange daisies.  We quickly discovered it's a process that can't be done in separate stages, because the fondant dries too quickly.  So, somebody has to roll out the fondant and cut the shapes, while the other person shapes the flowers and adds the details.  My other friend Laura (and her daughter Charlotte) also offered to come over and help me finish the rest of the flowers Tuesday evening.  It's so much more fun to work on these projects with someone else.

Then, I baked all of the cupcakes - chocolate, white chocolate, and buttery yellow - on Wednesday & Thursday.  I tried a couple different recipes, but somehow I keep coming back to doctoring up a mix. Interesting to discover that chocolate reacts differently than the white & yellow cakes to changes in the recipe.  Maybe that's another post.  So, the cupcakes lived in the freezer for a day or two.

Friday afternoon, when my friend Chase got home from his culinary classes at Le Cordon Bleu, I invited him over to practice his piping skills.  I had made three batches of buttercream icing, making sure it was a good consistency - not too thin, so it would be able to hold decorative shape, but not too thick, so we would be able to pipe it quickly and smoothly.  Chase was happy to get some piping practice in, and I gave him my newly-perfected buttercream recipe as a thank-you.  Y'all, I was stunned that we knocked out all of those 160 cupcakes in under 2 hours!  Again, the work seemed so much easier and the time passed more quickly; we had a blast.  I ran out of icing as soon as we finished the last of the cupcakes, but I had to run to the store for more meringue powder before I could make any more buttercream.

So, it's the night before the wedding, I had made another batch of icing and was sitting down to ice the top tier of the cake after dinner. It was supposed to be a super-simple design with a vertically-striped texture.  You'd think I could do it in my sleep.  For some strange reason, the cake was very crumby on the outside, so I applied a thin layer of icing to catch them all.  Then I applied the normal coat of icing and waited a few minutes.  Then, I tried to apply the textured icing, but I could never get it smooth enough or even enough.  After several attempts within two or three hours, my eyes could no longer focus, so I scraped most of the icing off one last time and went to bed.  Miraculously, when I woke up in the morning, it only took me one try to get it right!

So, we excitedly loaded up the car with all of the cupcakes, the top tier cake, the canoe topper, and all of my box of emergency cake supplies - extra icing, extra flowers, spatulas, bags, tips, knives, etc.  The wedding was over an hour and a half away from our home, so I was a little concerned about the delivery, but not overly worried.  When we arrived, I could immediately tell that the cupcakes were fine, but the top tier had a major problem... the icing had COMPLETELY peeled off of the bottom half of the cake!  It was even peeling off the layer of cake crumbs beneath the icing!

Good thing we had arrived plenty early.  I found the tiny kitchen in the barn and scraped the cake bare... again. Then, I used the extra icing to re-ice the cake... AGAIN, and piped the simple border back into place.  This time, I put the cake directly into the refrigerator until after the ceremony! 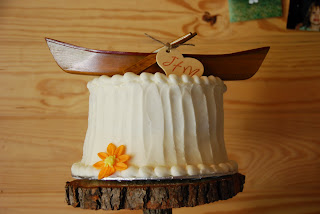 I had already set out the cupcakes before the ceremony, so all I had to do was add the top tier and the adorable canoe cake topper to complete the bride's beautiful vision... Ta-da! 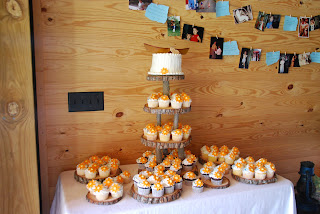