If ever I've had an honest-to-goodness CAKE-TASTROPHE, this one takes the cake!! Anyone else looking at how the cake turned out probably wouldn't be able to tell, BUT I KNOW. I'm sure it's going to seem like I'm beating myself up, but I had a very specific vision for this cake, and I was sorely disappointed with how it turned out. Yes, I made it work out OK in the end, but it was not at all what I originally had in mind. I was debating whether to even post pictures of it, but I decided that in the interest of honesty, I need to post the good, the bad, and the ugly.

My friend Terri's youngest little boy, Cameron, just turned 4. He came up to me at church and asked me to "pwease" make him a chocolate Pirates of the Caribbean cake. How could I refuse?! Anyway, I called Terri the week of the party to ask what pirate-y image he would like best - treasure chest, jolly roger, pirate ship, Jack Sparrow, treasure map, or something else - the possibilities are endless, you know. She thought he'd like Jack Sparrow or a ship.

Somehow, I got the inspiration to do a transfer of the face of Jack Sparrow. I had it all planned out, and it wasn't a difficult task. Or shouldn't have been.

First, when I baked the cake, I deliberately added a second mix of batter so that I would have one tall cake instead of baking two layers. I was trying to be efficient (read: lazy). When I took the cake out of the oven, it looked absolutely perfect. I let it cool for a few minutes before turning it out of the pan, and when I came to release it, the entire center had caved in. It truly looked like a volcano. So, I sliced off the top half and baked another regular cake layer. That set me back a few hours.

Then, I started decorating. I iced the cake with a crumb layer, and then also iced the sides of the cake in white. Then I colored the icing for the top of the cake a parchment-y tan color. I had found an awesome pumpkin-carving stencil of Jack Sparrow's face online.
In the end, little Cameron recognized what it was and loved his cake, though, so I guess that counts for something. 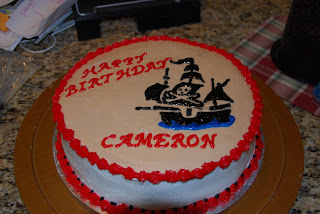 And, of course, after I finished it, my brilliant son suggested that I should've traced the Jack Sparrow face onto some rice paper I have, instead of trying to transfer it, because the rice paper just "melts" into the buttercream icing after you set it on top of the cake. You know, come to think of it, THAT probably would've worked... AAArrrgh!!!
Posted by Kelley at 1:06 AM 1 comment: