Sorry... Didn't mean to leave ya hanging with an unfinished Tinkerbell cake.
The truth is that I took all those photos at home while I was making the cake, and then I forgot my camera when we left for the party! So, my friend sent me the photos she took once we got to her house and set up the cake. First... me adding the final touch - the Tinkerbell candle. 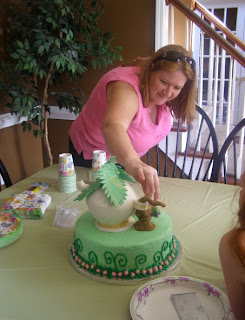 This is how the cake looked when everyone came into the house for the party. The girls loved it, and nobody could believe that it was completely edible. 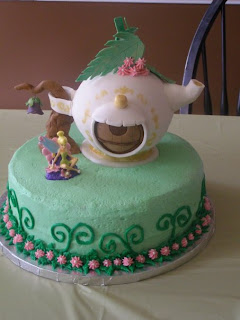 The birthday girl with her cake. She said to her mom, "I can't believe she made this just for me!" Such a sweet girl, that Bayley. 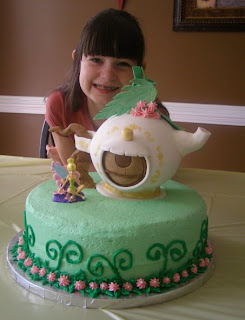 After the party was over and all the cake was gone, the family decided to crack open the teapot and enjoy the white chocolate inside! 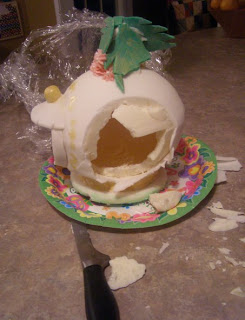 I made a pirate cake for my friend's son last year, and this year he's requested Batman. I happened to have a Batman cake pan, so I figured that'd be easy enough. Then she said there would probably be 40 people at the party, so I decided to make two Batman cakes and stack them like a layer cake. I've done it with my SpongeBob pan before. Turned out to be just EXACTLY enough. No leftovers!
Oddly, I've had the Batman pan for about 8 years now, and I've never made a Batman cake. I got the pan when my son was turning 6 and wanted a Bibleman cake. So, thank goodness I'd kept the instructions on how to make Batman. 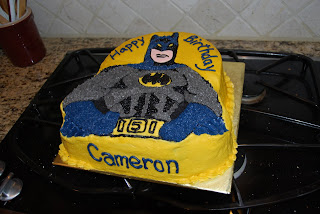 I got TWO BIG HUGS from the adorable birthday boy, so I guess that means it was a success!
Posted by Kelley at 7:59 PM No comments:

A work in progress...

I've posted lots of photos of cakes I've made over the years on this blog. I've even written about how I've made each of them or who they were for. But I just realized that I've probably never written a post with photos about each step in the decorating process. So, here goes my first attempt.... 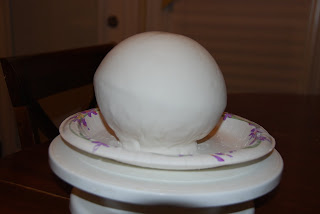 Well, I guess I didn't start snapping photos early enough in the process, but first, I made a ball out of Wilton Candy Melts (white chocolate), using my sport ball cake pan. Basically, you pour the melted candy into the pan and chill it until it has hardened to about 1/4" shell. Then you scrape out the rest of the melted candy, add some more to it and make the second half. Don't forget to spray the pan with cooking spray first. Makes getting it out SO much easier. Anyway, once they're both set, you can stick them together into the ball shape using more melted candy as "glue."
Then, roll out some white fondant and cover it. I left a little bit on the bottom for a "base" even though that wasn't in the instructions. I just thought it'd be more stable that way. Something I would've done differently is to cover the chocolate ball in more candy or buttercream to help the fondant adhere better. But it didn't mention anything about that in the instructions, so I didn't know any better. 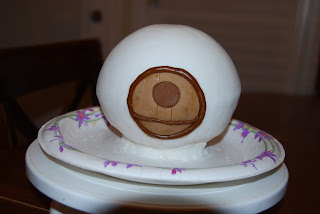 OK... to start decorating the "teapot," first I added the door and window, which were cut out of light brown and dark brown fondant. I used a knife to make the door look like it's made out of wood planks. Then, I rolled dark fondant and made a door frame and a brace across the bottom portion of the door. 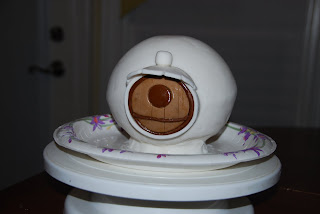 Next, I used some more white fondant cut in a 1/2" strip to go around the doorframe. Then, it was time to make the little awning look like a teapot lid. It's really just about 1/3 of a circle cut straight across, and then I notched out little "v" shapes from the rounded side. I attached it to the doorframe and curved it. Then, I made a little knob out of fondant too. 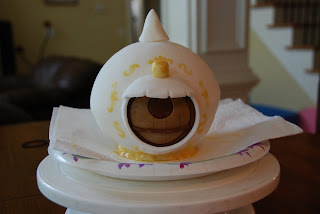 Next, I added a little cone shaped lump of fondant on top for the roof leaves to attach to. I also used gold Wilton Pearl Shimmer Dust (mixed with Wilton's Clear Vanilla flavoring) to paint the base and knob and the swirly design around the door. It's starting to look so cute! 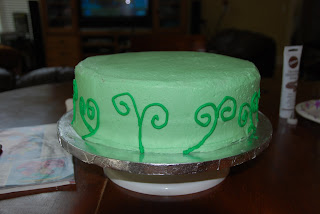 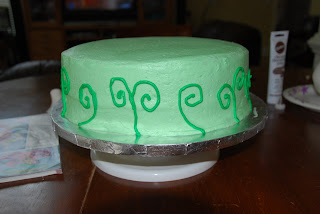 I iced the cake in a light green color, and then piped some curly stems all around the sides of the cake. 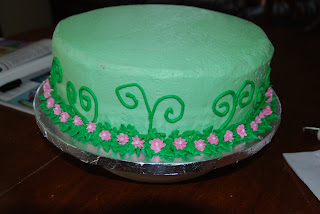 The bottom border of the cake went on next. First, a layer of leaves, then pink drop flowers, then Wilton Sugar Pearl centers. 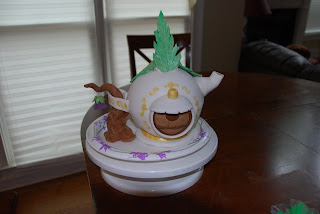 Back to the teapot, I made the handle and spout (of fondant) and attached them with melted candy. The tree trunk is also made of fondant - light and dark brown marbled together. The flower dangling from the branch is also fondant. I had cut out the large leaves for the roof out of green fondant the night before and let them dry leaning up against a plate. I was supposed to have a pattern, but never bought the book, so I just cut them out freehand and scored them to look like they had veins. Then I painted them with more of that gold shimmer dust. When I attached the leaves to the cone with melted candy, it was difficult to get them arranged. Two out of the three leaves had the stem break off too. I put them on and stepped back to snap a photo. But this just didn't look right. Too much Tiger Lily for Tink's house, if you know what I mean. 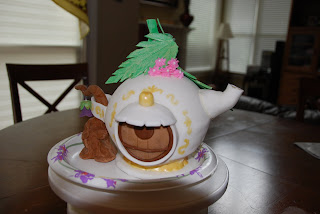 Much better... and those little pink flowers cover a multitude of sins, I tell you. 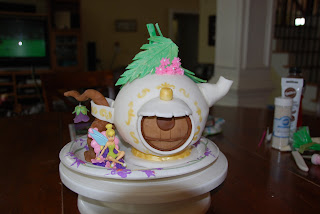 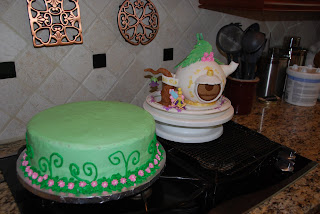 Add the Tinkerbell candle, and the picture is almost complete. Now the cake is ready to transport to Bayley's birthday party! (Actually, for me, transporting cakes is the most nerve-wracking part!) Soon, I'll post another shot or two of me assembling the cake and the excited birthday girl.
Posted by Kelley at 1:27 PM 2 comments: