A friend I've known for several years approached me at the pool last week and said she was glad to hear that I'm finally charging for cakes, because she wanted to order one for her son's 9th birthday party.  I was  pleased that I was getting the chance to do a Star Wars cake, because it's been quite a while.

After much searching for ideas on www.cakecentral.com AND Pinterest, I came up with the idea to do the Star Wars logo on the front, with light sabers around each of the sides. After I posted a plea on facebook, a friend helped me find the font that matched the one used in the Star Wars logo. So I printed it and cut the letters out by hand.  The light sabers were fairly straightforward, and I was fortunate to have all of the colors I needed to make them already on hand. 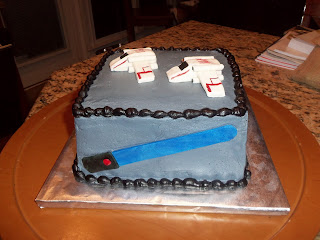 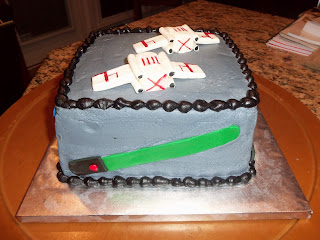 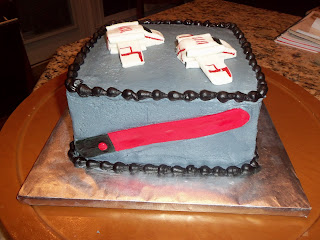 I wasn't sure yet what to do for the top of the cake, but I was considering making a Yoda figure out of fondant, or these cool X-Wing fighters that I saw on one of those sites.  In the end, my time crunch dictated that I make the ships, because much simpler than Yoda they were.  The X-Wing fighters seemed to be flying, propped up on toothpicks, but mine were made of gumpaste, and ended up being too heavy for flying. They sunk right into the cake. Oh well... can't win 'em all! 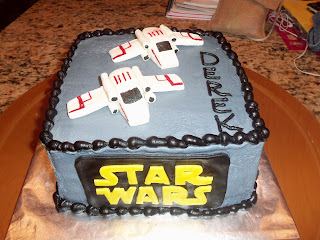 Of course, the MOST important thing (to ME) is that my friends love the cake, and the birthday kid is thrilled.  His mom said that he thought it was "super cool!" Mission accomplished!
Posted by Kelley at 10:07 PM 1 comment:

Ruffles for a Friend

For my friend Terri's birthday, a bunch of us met at a Japanese steakhouse for dinner to celebrate. She knew her husband was taking her there for her birthday, but she didn't know that the rest of us would be there.  My friend Sharyn, who had arranged this little surprise party, asked me to make a cake and I happily agreed.

Knowing Terri like I do, I know she LOVES my buttercream icing. Don't even bother messing with fondant. Just go for whatever cake design gives her the maximum frosting-to-cake ratio possible!  So... I was excited to try this simple ruffle technique that I had seen on one of my favorite cake blogs, "i am baker."  I chose a teal/turquoise color to go on the scrumptious three-layer chocolate cake. 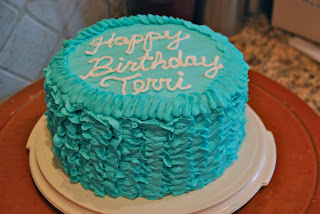 And, here's a close-up of the ruffles: 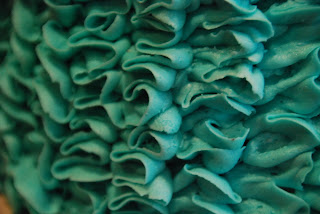 This design is a very forgiving one, just like the rose cake that I also found on that blog.  I love forgiving cake designs. They look very impressive without having to look perfect. That is SO me!  I would definitely love to practice this technique more, so feel free to request it... in different colors, with different borders, the possibilities are only limited by your imagination!
Posted by Kelley at 12:23 AM No comments: