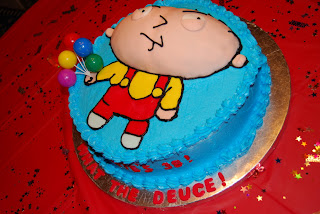 I made this cake for a surprise birthday party for my neighbor (Stewart). I copied one I found on CakeCentral because I had never seen The Family Guy show. I guess this baby character is named Stewie, so I wrote, "Stewie's 38! What the Deuce!"
The blue background is all done in buttercream; Stewie's head and body are covered in fondant. It was like making a puzzle, but it was pretty fun. I used Wilton black icing for the outlines, but next time I would use something easier to work with, like black piping gel.
It was hard to get a good photo angle on this cake because of Stewie's 3-D head. Anyway, this is the first cake I've made in a little while, so I felt a little rusty at times, but everyone at the party seemed to enjoy it. I just hate when they make me cut the cake, though!
Posted by Kelley at 3:03 PM

I've never seen that show either. Kind of weird if you ask me :o)

It was funny... when I finished the cake, I stepped back to look at it, and I decided that his little red outfit looked a little more like a wrestling suit than overalls. Oh well!