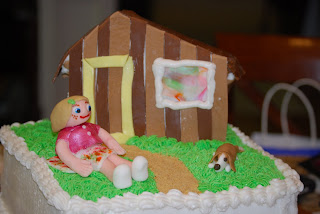 Here are some pictures of my most recent original creation. My girls both had birthdays last month, and so we invited about 10 of their friends to watch the new movie Kit Kittredge: An American Girl at the theater. So, I was going off of a picture in the American Girl catalog for this special cake.

So, there's a 10-inch square 2-layer cake for the base, and then the house was made with the Wilton Stand-up House pan. I ran out and bought it the day I was baking because I decided to do the 3-D thing, instead of a two-dimensional image. 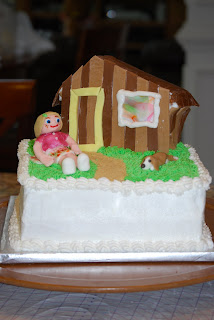 The base cake is covered in buttercream, with green "grass" on top and a graham-cracker crumb pathway. (Ace of Cakes I'm not, or else I probably would've attempted the tree!)

Anyway, the clubhouse is covered in fondant "planks." (Good thing it's supposed to look rustic!) I actually made them all a little longer than they needed to be, and then snipped along the roofline with scissors after they were attached.

As for the rest of the house, the "stained glass window" was white fondant with pink, green & orange icing colors swirled in. I used one solid piece of fondant to cover the back of the house. And the roof pieces are just scored to look like shingles, (although Hayden said they looked like chocolate bars).

Obviously, the main character, Kit, and Grace (the bassett hound) are made of fondant as well. I used Wilton's Pink Pearl Dust mixed with clear vanilla to paint Kit's sweater, and her skirt was brushed with Wilton icing colors - pink, green & orange. 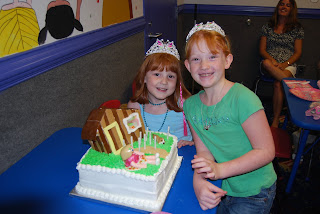 My girls are among the very few people I know who request lemon cake. Lemon is one of my favorites too, (especially in the summertime), but I rarely make it because people don't request it very often. So this time I mixed two lemon cake mixes with a French vanilla one, and the flavor was perfect, if you ask me. Not too sweet, not too strong.

The only hitch was convincing the girls that chocolatey-caramel ice cream and mint-chocolate chip were NOT good pairings for lemon cake! I finally got them to agree on Rainbow Sherbet!

The cake barely survived the drive to the movie theater, (see the house leaning backward?! and the smushed icing border on the front?) but I think I can put a tally mark in the "success" column for this one. The birthday girls liked it, and that's all that really matters in the end, isn't it?

It turned out beautifully! I bet the girls will always remember it and the fun time they had with their friends!