Both of these cakes were made for work-study students who worked in my office when I worked for Grand Canyon University.

The first one is interesting because I had seen some kind of pattern where you bake a round cake and a square cake to make a clown shape. Obviously, I cut up the square cake for the hat and collar. Then I just had to ice it, put borders on, and decorate with M&Ms (carefully making sure the Ms were not visible, of course). 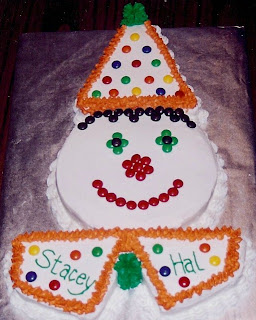 The second one used the little plastic clown heads, but the clown bodies are made entirely out of icing. They taught us this technique in my Wilton Cake Decorating I class in 1996. That's also where I learned about the klassy technique known as bag striping. You take a paintbrush and stripe the bag with icing color(s), and then fill the bag with white (or another color) icing. When you squeeze it out through the tip, it gives a stripey-swirly effect. And yes, that's the technical term. There will be a quiz later, so write it down. 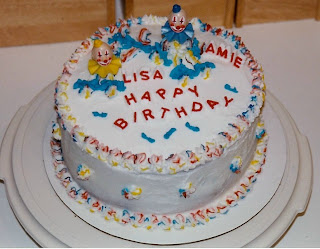