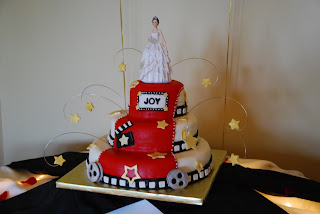 My friend's neighbor had a daughter who was about to turn 15.  The neighbor is from Puerto Rico, and in her culture, that is the age where they celebrate with a quinceañera.  It's kind of like a mini-wedding because there is a church service where they have a ceremony rededicating the girl to the Lord, as well as acknowledging her becoming a young woman. The ceremony is followed by a big reception celebration.

Joy chose to have a Hollywood theme to her reception, and wanted her cake to reflect that theme with a red carpet and lots of glitz and glamour.  They had purchased the figure in Puerto Rico and wanted to incorporate that somehow as well. Joy brought me several photos of cakes that she liked, and I tried to combine most of the ideas as well as make it her own.

When I delivered the cake to the country club where her reception was being held, the staff raved about it.  I later got a note from my friend who photographed the event and also from Joy herself letting me know how much they loved the cake. That made me feel really good. :)
Posted by Kelley at 2:15 PM

Betting on in-state collegiate game outcomes is allowed, however player prop bets in collegiate video games are prohibited. Native American tribes had already qualified a ballot measure allowing sports bets on tribal land when international gambling corporations made their play, committing $100 million to an initiative that would let them control on-line wagering. 우리카지노 That measure can also be|can be} expected to qualify for the November ballot given the pace of signature assortment and the money at proponents’ disposal. The firms include BetMGM, DraftKings, FanDuel, Bally’s Interactive and different big names.