I've known about this project for months, and I've been so excited for it to finally be here.  My friend's eldest son was eloping out of state, and she was throwing a reception for them here.  She said that the bride and groom were very laid-back about the whole thing, and she wanted to make this reception less formal and more fun for them.  They are both avid rock climbers and would love something with that theme. Nothing too wedding-ish.

I found a few ideas on Pinterest, but when my friend said that they didn't want the cakes to be covered in fondant, I had to re-think a few of the design elements.  So, I decided to make the buttercream a rough, rocky texture and just put hand-holds all over with a bride & groom sitting on the ledge.

I had a photo of the bride & groom, so I tried to make the figures look similar.  I have a LOT to learn about making sculptures with fondant; most of all I need to learn NOT to just "wing it." I at least need to practice, or even better, make the figures ahead of time.  OH... if only that ended up being my biggest challenge with this cake project!! 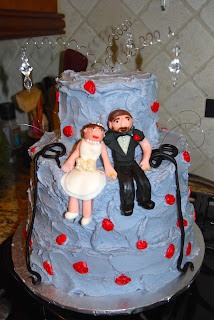 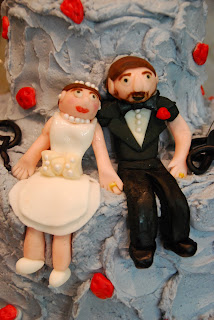 One thing I did do differently was put it on one side of the vehicle, rather than in the center of the back cargo area.  I wanted my daughter to be able to keep an eye on it right beside her.  It was a hot, humid Atlanta afternoon, and we hadn't gotten more than 2 miles from home when my daughter started getting worried that the cake was sliding.  I told her not to worry about it because I knew that it was properly supported.

Well, let's just say I was WAY WRONG!!  When we got to the reception hall, I took the cake straight to the kitchen and tried my best to fix it (with some extra supplies that I always bring along in case of emergency). But it was SO lopsided that the ropes had fallen, the bride and groom's arms were all broken, and their bodies were sliding down the rock!

It was truly one of my worst nightmares.  I was terribly upset, almost in tears.  My friend was SO graciously nice about it, though. The only thing that made me feel better about it was knowing that they were so easy-going, and also the fact that we were going to take the cake apart momentarily and cut it up to eat it anyway.

Honestly, it all worked out just fine.  The groom was impressed at how much the figure looked like him (even though I hadn't ever met him before).  I even had several people tell me that they loved the cake, and - get this - ask how in the world did I make it look so asymmetrical?! Because, as you know, even God himself didn't create any symmetrical rocks.

Thanks for sharing this useful info.. summer camps california