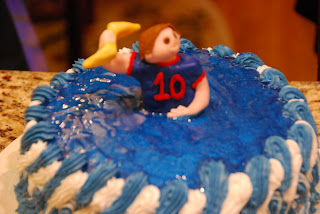 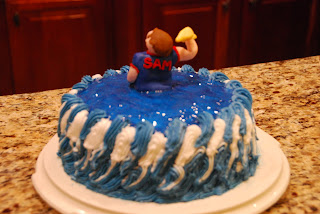 My friend's son  is really into the "Percy Jackson and the Olympians" stories, and his 10th birthday was around the time that the movie came out.  Our families were celebrating his birthday together, so I decided to attempt a Percy Jackson cake for him.  (Can I deduct my movie ticket as "research"?)

So, Sam just wanted white cake, and I went with a round shape, because I'm lazy like that.  I attempted to make the sides look like big waves (using a star tip 21), and use Wilton blue Sparkle Gel for the water on top of the cake.  The Percy Jackson figure is made out of fondant, with red icing for piping Sam's name on the back, and his age on the front.  If you haven't seen the movie, that's a lightning bolt he's holding up. 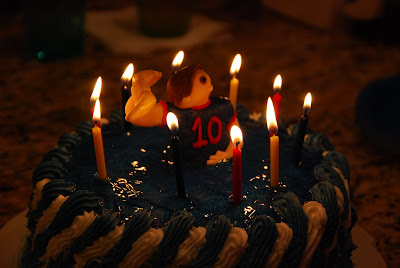 He looked pretty cool when we lit the ring of fire - um, I mean candles - around him.
Posted by Kelley at 2:01 PM