I was slammed with cakes this weekend! Both of my daughters had birthdays this week, as well as my neighbor's son, Chase (my son's best friend). If I don't see another cake for a while, I'll be fine.

The first one I did was for my daughter, Hayden Beth , who turned 5 on Monday. She wanted a Strawberry Shortcake cake, chocolate on the inside. My in-laws were in town and we had the neighbors over to celebrate with us. Hayden was hanging around the kitchen all day long trying to get a taste of the icing! I took this picture thinking I was finished, but it was just wishful thinking. I'm so goofy that way. I'll have to post an updated picture later (when I find it) with the hair and freckles added. For now, this one will have to suffice: 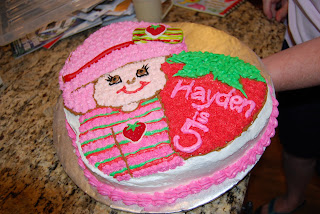 The second cake I made was for Chase's 14th birthday party on Saturday. He chose a golf-themed cake from my Wilton Idea Book (2006). I modified it a little because I figured teenagers wouldn't like a fully-covered fondant cake. So, for the blue sky, I used the recipe for Wilton's Quick-Pour Fondant (p.111). 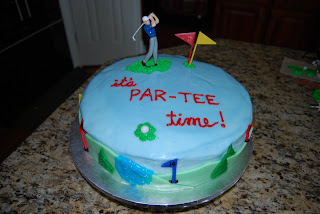 (I had major writer's block about the message.) 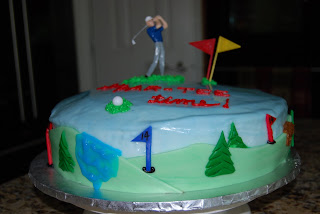 Nothing better than chocolate cake and buttercream icing!

Last but not least, the third cake was for my other daughter, Kirstyn, who turned 7 on Sunday. She had chosen an Ariel (Little Mermaid) cake. I like the way it looks, and it was very yummy. (Kirstyn chose Lemon flavored cake - one of my favorites, especially in the summertime.) But I must say that character cakes are not my favorite thing to make. The stars get a bit tedious for me. I actually made the red icing this time, since I needed a bunch of it. I used liquid red food coloring (lots of it!) and a little orange paste coloring. When I quit mixing it, I had to add a little more powdered sugar so it wasn't too thin. And it wasn't quite as bright as I wanted it to be, but it did brighten after it dried, as I hoped it would. Here's the finished product: 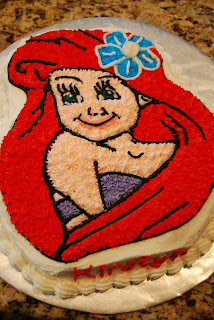 Now this weekend just seems like a crazy, sugary dream with a bunch of happy kiddos. My kitchen is cleaned up (miraculously)! Except for a couple of decorating bags and tips. So I'm not complaining.

**********
UPDATED TO ADD: I finally found a picture of Hayden with her finished Strawberry Shortcake cake. Really, the hair and freckles make all the difference. We couldn't have a bald SS now could we? I know y'all were dying to see it. Here you go... 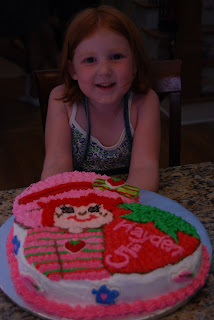 Oh my goodness Kelley... those cakes are absolutely adorable! I can't believe you're so talented with all of that. I would love to learn more about cake decorating some day!

Very good. You have talent! I wish I had the knack and patience. Better yet, I wish you were nearby to order from! I like this new blog of yours!

Goodness gracious, but those are gorgeous! Makes me want to take a class. Sort of.